Long before Banksy, we had Nyero!

When it comes to inspirational, thought-provoking art there are few today to compare to the mysteries Banksy, but long, long before his time came Nyero.....

Nyero is actually a site rather than an individual artist, with the men behind the brushes believed to have been iron-age Batwa tribesmen. Located in the Kumi District of Uganda, some 200 km east of Kampala, you'll pre-historic paintings thought to be almost 1000 years old*, upon the rock formations and in caves.

These fascinating paintings of geometric patterns were first documented in 1913 and date back to before 1250 AD. It is among the most important and well documented rock art sites in Uganda and are on the Tentative List of UNESCO World Heritage Sites.

Artistic Traditions This rock art is part of an ancient tradition, that are found across east and central parts of Africa. The Nyero site is one of the easiest to reach in Africa. It consists of six smaller sites, set across three-tiered rock shelters, and is arguably the finest of a wider network of 56 rock sites across Uganda.

‘Nyero 2’ is the main site, with a 10 metre high wall protected by an overhanging rock boulder - estimated to weigh at least 20,000 tons. More than forty designs in red paint decorate this wall, mainly of fascinating concentric circles but also ‘canoe’ like shapes and some vaguely human and animal forms. 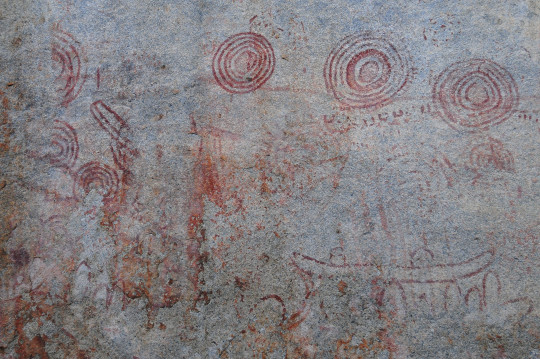 Archaeologically the site dates back to a Later Iron Age period but the true origins and meaning of these painting are still unclear. It is thought they originate from the ancestors of the Batwa (Twa) people, hunter-gatherers of Pygmy origin, who now currently reside in and around Bwindi.

Concentric Circles It is thought that the concentric circles symbolise the Batwa's relationship with the all-providing and protective nature of the forest, a place for rainmaking and fertility rituals. Other studies have suggested that they were the work of semi-nomadic people who used the paintings as a reference point to herd their cattle towards water. 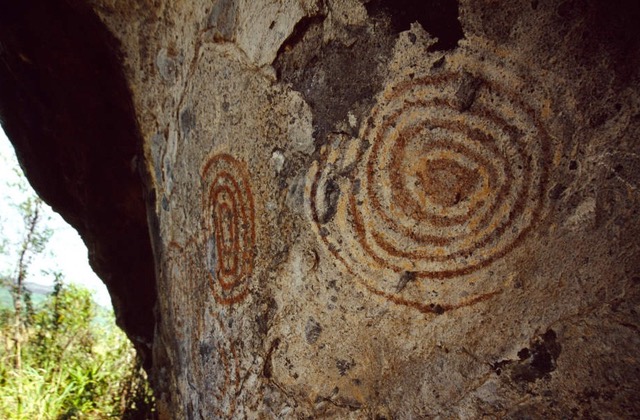 A visit to this fascinating site can be reached by those exploring Eastern Uganda, as it can be added into itineraries that include Sipi Falls, Mount Elgon or Kidepo.

*Some expert researchers have even suggested they may be up to 12,000 years old!

A vibrant and unique pot pourri of culture.