A rare antelope has been caught on camera for the first time ever in Uganda despite not having previously thought to inhabit the country. The Lowland Bongo, which is officially classed as  "near-threatened", was spotted in Semliki National Park, close to the border with the Democratic Republic of Congo (DRC).

The project was led by scientists at Chester Zoo UK, alongside the Uganda Wildlife Authority. The search for the rare antelope saw Chester Zoo’s motion-sensor camera traps capture more than 18,000 images from over 30 different species including elephants, chimps, buffaloes and leopards. This was the first wildlife survey of its kind in Semliki 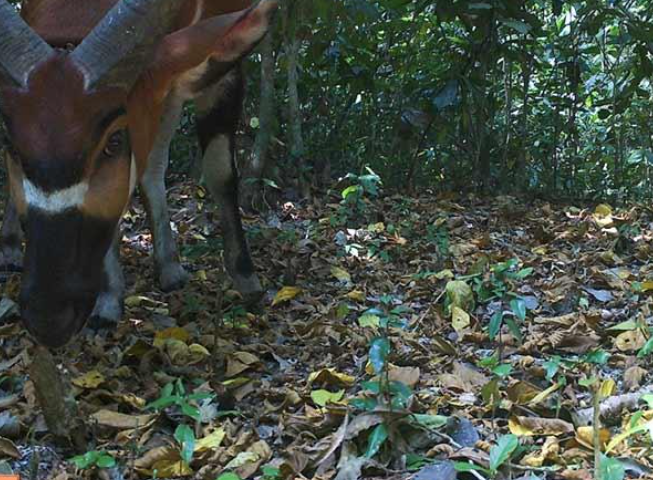 The species is the world’s largest antelope and was thought to be endemic to DRC, Central African Republic and parts of Western Africa. It is recognised by its red-brown and white striped coat and large spiralling horns. The timid and easily frightened mammal stands at around 1.3 metres tall and an adult male Bongo can weigh over 800lbs.

Only 30,000 of these shy creatures remain in the wild and there are none in zoos. This type of antelope has been under serious threat across central and Western Africa due to hunting for meat and infringement on their habitat by humans. It is also sadly a popular target for trophy hunters.

The researchers are surprised that such a large animal has gone undetected in Uganda, however Bongos are known to be veru shy and elusive. They suggest that it, as well as other species are moving between the Virunga National Park in DRC and Semliki National Park in Uganda, demonstrating the importance of protecting the rainforest between the two countries.

This recent discovery, along with research into the separate Mountain Bongo population, in the world’s zoos and the few that remain in the Kenyan highlands, reveals a closer relationship than thought with the Lowland Bongo and may shed light on the evolutionary relationship of Bongos found in these regions. The large-scale camera trap survey, covering 220km2of the Semliki National Park continues and there is anticipation that further rare and endemic species may be discovered.